On Wednesday night Jelena Paunović and other animal welfare activists were notified about a dog in Sarajevo with a devastating wound. They were sent the following two photographs.

Jelena and others went to search for the dog – in an area very far from where most of them lived. But the dog was not found. They went out again yesterday as they heard about another dog who had been run over by a car. They looked for both dogs. The dog with the wounded jaw was not found. And today another search is being made for this dog, but as the dog has no lower jaw or tongue it will be a miracle if it has survived. We know nothing about this dog, how the wound happened.

It is a shocking reminder of what happened to Vučko almost exactly one year ago. If the dog is found, we will do everything to save its life. It is unlikely veterinary surgeons in Bosnia can help so it will require the intervention of an international animal welfare group or individual with a great deal of funds.

UPDATE DECEMBER 5 This poor dog was found, dead, in someones yard. Just devastating news. Even after a reward was posted, no one found him in time.

During the search, Jelena and the others fed as many stray dogs as they could. There are over 11,000 strays in Sarajevo. Winter is a very hard time for them, right now there is no snow, but thick snowfall happens every winter, and temperatures plummet to -20 or -30 degrees C. They found adult dogs and puppies, many of them.

When Jelena and her friend Jovanka started the car to leave for another area to search, one dog ran after them and so they pulled off to feed him. When they decided to go, the dog jumped into the car through a half opened window. He was in the car for some time but at the end they had to leave him. It is obvious that dog was left there, thrown out of a car, probably, and that he wanted to jump into another one and leave that place. Jelena said: “My heart was bleeding as we left.”

If you are asking why they did not bring the dog to safety: know that it costs 120 euros a month to put a dog into ‘pension’, and that Jelena already has nearly 20 dogs in pension, and she has no income. She and the other activists who work with her rely 100% on donations to keep these dogs in pension. If you read what Jelena writes at the bottom of this page, you’ll see her reasoning for what dogs she tries to save and the ones she leaves behind. It is always a very very difficult choice. Remember, there are 11,000 strays in Sarajevo. Only two state shelters which are overfull already, and no government support or spay-neuter program.

UPDATE DECEMBER 5 GOOD NEWS!! This dog has been rescued! Someone in the UK read this page and has generously offered the dog full sponsorship and adoption. Jelena sent out people to find the dog this morning, and he was found! Right now he is in Jelena’s care, until there is a place for him in pension where he can be prepared for travel. He’s been named ‘Billy’.

And then, they found the dog who was run over. They called him Sanny.

This is the story in Jelena’s words:

“Today, Jovanka and I received a call to inform us that there was a dog hit by the car in one neighborhood in Sarajevo. We went there, seeing many dogs as we searched but all of them playful and unharmed. 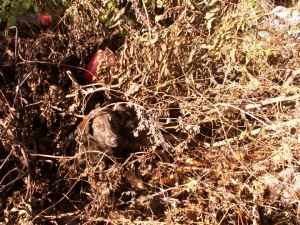 After a long time searching Jovanka noticed an injured dog lying on the garbage pile in a ditch. The dog was almost buried under fallen leaves and covered by a bush. We could hardly get him out of there.

At a nearby gate was a very rude guy who lives there, he was very impolite toward us. He saw no point whatsoever in getting this dog out of there and getting him help! Most people here think dogs are unimportant. We managed to take dog out, pack him in the car and of we went looking for a vet station.

A vet a made X-rays and neurological exam. The X-ray showed that the dog’s lower part spine was shattered and there was not much to be done for him. In the end we had to put him to sleep as he had no chance to survive and get better. I spent most of the day with him; it was very exhausting and the only thing that stays as a question: was it worth it?” 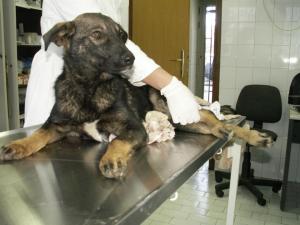 Jelena was up at 5 a.m yesterday and went to bed well after 1 a.m. This is ‘normal’ for her and what happened yesterday was not an unusual day. You can imagine how physically and emotionally shattering it is for her and the other activists. I have a hard enough time just posting these blogs. I could not do what she is doing. She needs all the support she can get – not just in donations to help feed strays, rescue wounded strays and so on, but to involve international animal welfare organisations and EU governments to push the government of Bosnia-Herzegovina to make drastic changes to how they and the citizens of their country treat animals. See ACTION TO TAKE and, if you are able, please donate to help cover the costs of what Jelena is doing.

This site is dedicated to Vučko. Read his story and don’t let him have suffered and died in vain. Please help the stray dogs and cats in Bosnia-Herzegovina. The situation there is utterly dire, Vučko is but one amongst many horrifically abused animals. Go here to find out how to help them.  Money is needed for food, medicine and foster housing. You can donate via PayPal and I then transfer the money to Bosnia. I can also give you the PayPal email address of my Bosnian animal welfare contacts if you prefer.  Even just one dollar or one euro will help.