I have written about Gladno Polje Shelter in Sarajevo before, here:
Horror Camps for Animals in Bosnia. 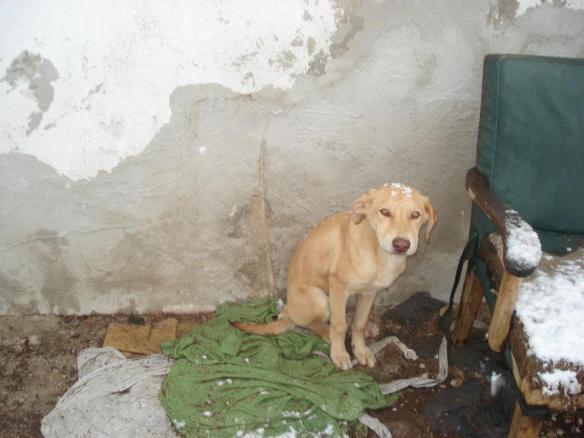 This shelter houses about 200 dogs, who live in appalling conditions due to lack of funding from the Municipality and Agricultural co-operative who started the shelter. Please read the above post for details of the conditions of the shelter. 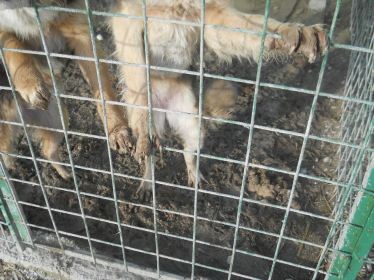 Essentially the workers in the shelter were given responsibility for the dogs on a minimal wage and without health insurance and so on, but no adequate fund to actually care for the dogs. 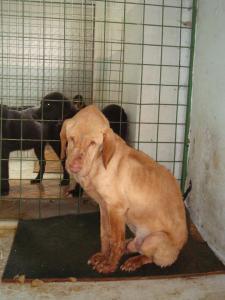 Sanela Kotorić Etterle and Adnan Smailbegovic, who volunteered thousands of hours of their time right from the start of the shelter, and were employees of the Director (Almir Džanković) for a few months, have been banned from entry to Gladno Polje. Sanela Kotorić Etterle and Adnan Smailbegovic have been told by the Director of the shelter that they are “not needed.”

The Director has changed the locks on the doors and has not given anyone any adequate reason why he has banned them from even visiting the dogs they have cared for for so long. 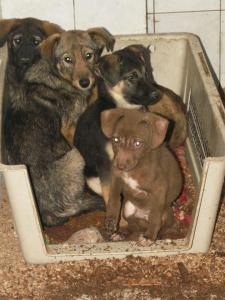 Our group, Animal Advocates for Bosnia (AWAB) has raised funds for food and spay-neuter programmes at Gladno Polje and I know from personal experience that Sanela and Adnan have only ever had the dogs’ well-being in mind. Sanela has worked tirelessly, putting her home-life, her health, at stake, to try to help the dogs at this shelter.

Sanela constantly begged the Director for more support for the dogs. She says:

“I didn’t want to start any arguments or wars. I’ve been always the one who wanted peace and contacted the other side to negotiate, to discuss in a civilised manner everything. When myself and the Director would meet, the story was always the same : he always gave the same promises which were never fulfilled.

I never asked for money. I worked all this time to provide for those dogs everything they might need. All I asked from him was to hire normal people to work there, who would maintain the hygiene at the shelter. I have stopped asking questions concerning spaying/neutering, vet care , food and everything else. When it comes to costs of transportation those dogs to the vets or to transport food to the shelter from people who have donated it to the shelter, all of that was financed from my own pocket or from the pockets of several other volunteers.”

Note that our group, AWAB, raised funds for the spay-neuter of over a dozen dogs at Gladno Polje, in particular the 10+ dogs rescued from Hresa last year who were then placed at Gladno Polje. We have also raised considerable funds for food, and have photographs and receipts to prove that the money was used appropriately.

On the fifth of March, Sanela wrote the following on Facebook:

“Adnan Smailbegovic and myself, Sanela Kotoric Etterle, received an official restriction to approach the Shelter Gladno Polje, a restriction to approach the dogs in this shelter. We have been banned and prohibited from  taking these dogs to an event at ‘Importanne Centre’ to help find them adopters and to collect financial and material help for the dogs at Gladno. In short,we have been denied access to these dogs in any way. I was not given any explanation. They hung up when I tried to contact the Director or anyone who in authority.”

It’s important to note that, unlike workers at some other dog “shelters” in Bosnia, Sanela has always been quite clear about the terrible conditions for the dogs at Gladno Polje, and has published countless photographs on Facebook and appeals for donations.

On April 7th, a group of volunteers visited the dogs at Gladno Polje.

The purpose of the visit was to spend time with the dogs and to bring them food. After they were denied access to the shelter by an employee, volunteers explained that they were there during visitation hours, as the shelter sign clearly stated. They received a very confusing answer by the same employee, who explained that they are currently not accepting any visitors, because Sanela and Adnan are banned from the shelter and that Sanela and Adnan, according to the employee, were thieves who collected food for the dogs and then stole or sold it. This information was given to the employees by the Director. 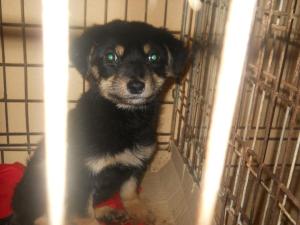 Volunteers told the employee that they will contact the local media. Entrance was immediately granted to see and feed the dogs, but the employees of the shelter oversaw the entire feeding process and claimed that the dogs were not hungry and that the volunteers were wasting food.

The shelter employee then immediately proceeded to remove the shelter sign which showed the visitation hours of the shelter.

Dženita, one of the employees at the shelter, is a veterinary technician, but because of the primary problem of horrendous living conditions for the dogs, she was not able to use her training as all her time was needed to keep the kennels clean. Sanela says:  “Dženita was a cleaning lady who worked for a little bit of money, which she hasn’t even barely received to date. She was a puppet (like some of us) to those who comfortably sat in their chairs and received their salaries on time, including insurance and benefits. They received their salaries from the money that was supposed to be spent on the dogs in the shelter.”

However, the Director of Gladno Polje pulled his Administration Assistant from his office and sent her to the shelter to take care of the hygiene and to oversee the entire process with the dogs.

Sanela tells us: “A woman who hasn’t walked into the shelter for months, not to mention that she doesn’t know those dogs and dogs in general (like the Director himself). This woman couldn’t even tell two dogs apart on the website when we only had 30-40 dogs at the shelter. So, today this woman told Dženita that all the shelter needed was a woman’s hand for everything to run smoothly…”

Dženita has now also been banned from the shelter.

On April 8th, the cantonal veterinary inspector visited Gladno Polje and witnessed the terrible conditions for themselves.

They returned two days later to find that the hygienic condition had improved. The kennels were cleaned up, the fence surrounding the shelter had been fixed so the dogs could not get out, and the dog kennels that were destroyed by the wind had been fixed.

However, advocates have heard today (14 April) from Haris, a visitor to the shelter that conditions are still very bad. 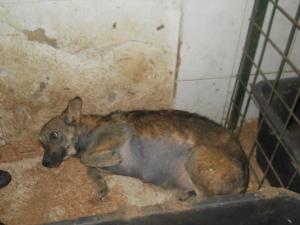 This situation at Gladno Polje is complex and confusing. So-called improved conditions – if there are any  – are unlikely to remain. And certainly, the sacking of Sanela, Adnan and Dženita is entirely unjust and the well-being and livelihood of the dogs there remains in a very precarious balance – as always.

Sanela says: “I believe and I hope that every day will get better and that they will continue to work in a positive direction for the dogs, even if I’m not allowed access to the shelter… Even at the cost that I’m never again allowed access. All I want is better conditions for the dogs. It is sad that it had to come to all this and that everything I begged for months has now been executed in two days. I will always suffer for and miss those dogs, but I will survive. I only hope they never have to suffer again. At this moment we are still waiting for vet inspection report and then we will make our next step together.” 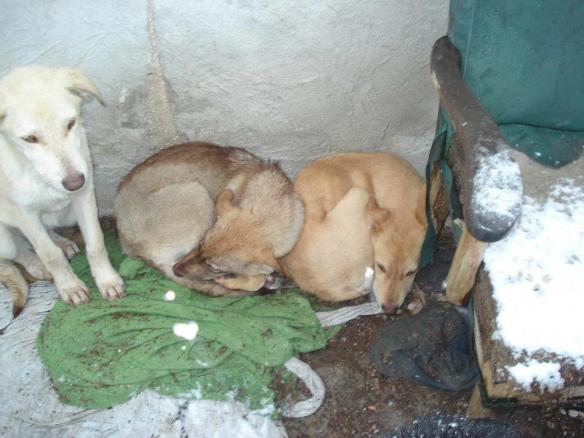 Sanela’s Facebook page where you can find more photographs: https://www.facebook.com/sanela.etterle 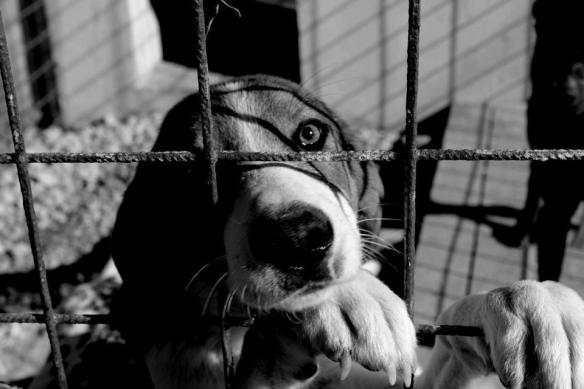 DONATIONS
Funds are needed not only to help individual rescues and to help us keep safe the 20 rescued dogs we are sponsoring but also to continue our advocacy work in Bosnia, uncovering the truth about what is happening there.

On our sister site, Animal Welfare Advocates for Bosnia, you can set up a monthly donation via PayPal, or if you want to make a one-off donation, please go to your PayPal account (or set one up, it’s very easy) and send the money to: donations@awabosnia.org as a ‘gift’. Click on the image below to be taken to PayPal’s home page.

11 thoughts on “Another Horror Shelter in Bosnia”