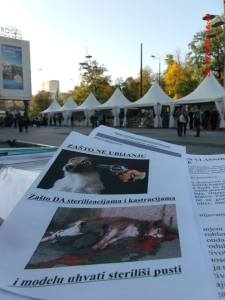 Bosnian Parliament’s vote on the kill-law amendments to the Animal Welfare Act has been postponed until Monday.

Today’s session was largely taken up with discussion of the sacking of Mirko Šarović (who was one of the key players in the Bosnian government against amendments to the Animal Welfare Act…).

HOWEVER, THIS MEANS WE HAVE THREE DAYS TO CONTINUE OUR CAMPAIGN! AND ITALY HAS SPOKEN OUT AGAINST THE LAW!

The Italian Government has asked the Bosnian parliament to reject the bill which was due to be voted on today in Sarajevo:
Bosnia: Italia chiede al parlamento di non uccidere i cani randagi

“The Minister wrote that the “The foreign ministry, including through our Embassy in Sarajevo, will continue to follow with great interest the problem and intervene also in agreement with our European partners, to urge Bosnian authorities to maintain the current legislation and ensure effective enforcement….The deputy PDL Michela Vittoria Brambilla (known for commitment to animal rights) commented positively on the initiative of  Minister Bonino, hoping, stating that the government will do “Everything in their power to press for a European directive that excludes  killing and  all governments, EU and non EU – starting with Romania and  Spain – who delude themselves by fighting with the killing of stray animals.”

WE ARE ASKING EVERYONE IN EUROPE TO WRITE A LETTER TO THEIR EU MEMBER OF PARLIAMENT TO ASK THEM TO FOLLOW ITALY’S EXAMPLE! PLEASE WRITE IT BY TOMORROW, FRIDAY, AS NO DOUBT THEY WILL NOT BE WORKING ON THE WEEKEND.

You can find who your MEP is by clicking on to this map: ‘Euromap’. Click on your country, you will be given a page of MEPS. Click on the first name. Look on the right hand side of the webpage where, in most cases you’ll see something like this: 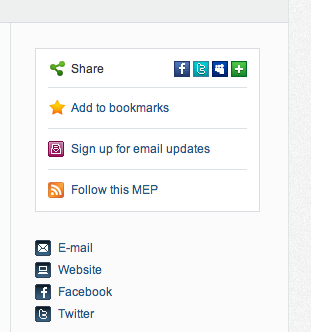 Click on “E-Mail” and send them the letter below, addressing them directly by name, and signing it with your name and your address. Go back to the list and repeat until you have sent the letter to all the MEPS in your country! THANK YOU!

Dear
As you certainly know, Bosnia Herzegovina is about to vote on changes to their Animal Welfare Act, changes, which if implemented, will have dire consequences for stray dogs.

The existing no-kill law, although not implemented, is a good, humane and enforceable law.

So far, only the Italian Government has intervened on BiH’s stray dogs’ behalf: the Italian Ambassador in Bosnia, Mr Ruggero Corrias, asked BiH politicians to not change but to enforce the existing law. Please see: http://www.lastampa.it/2013/10/24/societa/lazampa/bosnia-italia-chiede-al-parlamento-di-non-uccidere-i-cani-randagi-1wZsHQNIoyP6Rr1e0aKywI/pagina.html

Voting on amendments to to the Animal Welfare Act has been postponed for Monday 28th October. This means that we have some more time to lobby the authorities in BiH.

I ask you to follow the Italian example and strongly urge the Bosnia-Herzegovina government to not change the law but rather to start actually enforcing it.

Professor Selma Filipovic, Head of the Department of Surgery, University of Veterinary Medicine in Sarajevo has stated that “Calls to kill are despicable moves by political lobbies in order to buy sympathy from the public.”

If proposed changes become effective, euthanasia would be performed within 15 days from a stray dog’s arrival in a shelter. This may sound an effective way to deal with a burgeoning stray animal population, but please read on. There exists extensive documentation on how BiH ‘shelters’ ‘euthanise’ animals: by clubbing, injections of bleach and so on. These are cheaper, easer methods to implement. So you can be sure that if the existing animal welfare law is changed, such means of ‘euthanisation’ will become commonplace.

Studies on management of stray dog and cat population are unanimous in that euthanisation is not the most effective way to control populations. Euthanasia deals only with the symptoms and not the cause of the problem. It is expensive, inhumane and will not provide a permanent solution. Studies have shown that TNR (Trap-Neuter-Return) and CNR (Catch-Neuter-Return) programmes are far more effective (and far more humane) than euthanasia to reduce the street animal population.

Dalida Kozlic, lawyer and activist in Sarajevo has recently stated:

“What is the background to the proposal to euthanize stray animals? Money laundering! This proposal provides carte blanche for mass killing of stray animals, and to abolish the responsibility of lower levels of government, the veterinary profession, inspections and police for their four years of inaction in the lack of implementation of the existing Animal Protection and Welfare Law. This proposed provision is intended to mask the massacres of stray animals: politically eligible persons construct so-called shelters for stray animals, which have a function of the concentration camps, and then invoice for false spay/neuter programs, for food that will never be given to animals, for veterinary examinations and treatment, and at the end they invoice for euthanasia. In reality, the stray animals will be killed in worst (cheapest) possible ways, by the methods on which the medieval Inquisition would be envious.”

The solution to the problem of stray dogs is compulsory registration of all dogs and cats, punishing irresponsible owners, sterilization, strengthening cooperation with citizens, improving the situation related to the number of shelters and adoptions, as well as training veterinarians and inspectors. The system to the solution is actually contained within the existing Animal Welfare Act.

Please join with Italy and publicly condemn Bosnia-Herzegovina’s proposed changes to the Animal Welfare Act and demand that they enforce the provisions of the law.

And please keep sharing the petitions! So far we have managed to collect 62,226 signatures of the petitions on 1228 pages, and we will be updating these on Saturday night.

And The Huffington Post has just published an article on the situation in Bosnia Herzegovina. Finally the word is getting out! Canine Cruelty in Bosnia