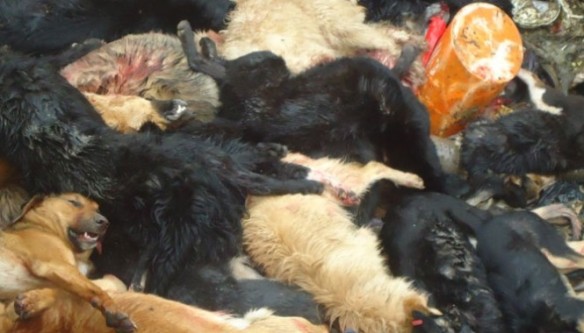 Reported today on Visokoin.com. Velika Kladusa is in the far northwest of Bosnia and Herzegovina, located near the border with Croatia. Translation of article:

More than 40 dogs killed during the last week, found at the Radic Vrnograč bridge dump in the vicinity of Velika Kladusa. On their bodies were visible wounds from rifle bullets.

This data, supported by photographs, was revealed by animal rights activist Sejad Kajtazović, who on Tuesday reported the case of unlawful killing of stray dogs to the competent authorities.

“I found this out on Sunday (23 February) when I went to the dump and photographed what I saw. I have not counted exactly how many dogs as they are thrown into a hole at a depth of five to six meters, but there are certainly more than forty,” Sejad Kajtazović told us. He had photos of dogs killed in the Todorova area, but there are indications that strays killed in other villages and hamlets around Velika Kladusa. It is suspected that stray dogs are killed by hunters and brought to the landfill workers of Kladuškog Public Utilities companies. The police officers have not given official confirmation of this information.

The Commander of the Police Station in Velika Kladusa, Jasmine Aldžić, confirmed that the application was received, and that the attending cantonal prosecutor has determined that for now there is no element of the crime committed. According to the commander, Aldžića, the case is still open and is being investigated in order to determine the exact facts.

According to the Law on the protection and welfare of animals in Bosnia and Herzegovina, the killing and euthanasia of animals (which is allowed only under precisely defined conditions) can only be undertaken by those trained for these jobs – a doctor of veterinary medicine, and hunters in the event that the killing of animals is necessary to maintain a natural balance.

As the photos show that the killing of dogs was performed outside the hunting grounds, it is clear that in this case there has been a violation of Article 15, which defines the terms and conditions under which the killing of animals is allowed. Offenders of this Article Act can be penalised with fines of 200 KM to 200,000 KM ($15 USD – $150,000 USD).

This is the second case of mass killing of stray dogs in the Una-Sana Canton this year. We recall that in late January in the Bosanska Krupa garbage dumps about fifty dead dogs were discovered, and the perpetrators have not been found. 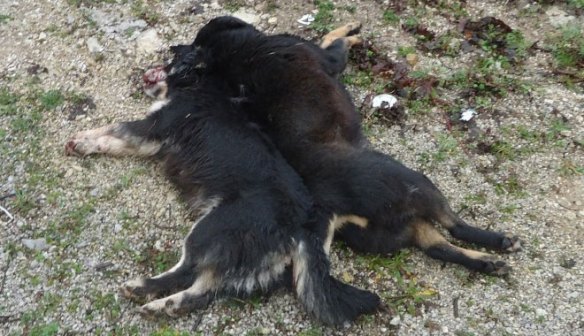 Currently under the BiH Animal Welfare Law there are only 5 ways when a vet can euthanize dogs:

This killing is clearly a violation of the law, just like all the other similar killings all over the country. Also note that one of the dogs in the photographs above has an ear tag, which means it was probably sterilised in July 2013, in a programe organized and funded by the German organization ETN – Europäischen Tier- und Naturschutz e.V. http://www.etnev.de/. Here is an article about their activities helping strays in BiH.

Velika Kladusa does not have an animal shelter. Activists from Kladusa, with great support from people abroad (ETN), have bought houses for stray dogs: 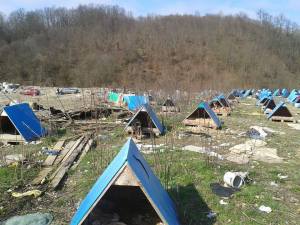