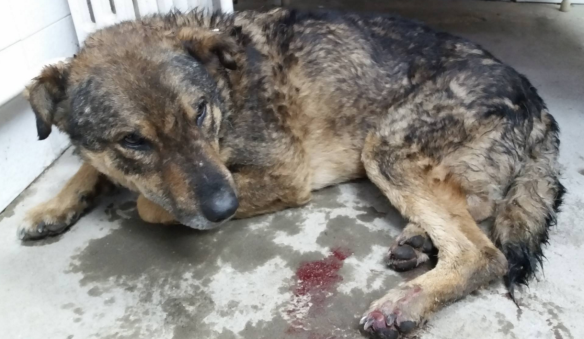 There are an increasing number of cases of animal abuse in the countries of South-eastern Balkans. Animal rights activists and associations for the protection of animals are daily faced with cases of the worst forms of animal abuse not only in public shelters and by dog catching services but on the streets of all cities and towns.

Cases of animal abuse are common even in the centre of big cities such as Sarajevo. You probably remember little Precious who was thrown of a bridge in the centre of Sarajevo. Despite the fact there are many cases of animal abuse in almost all parts of Balkan, the most specific thing is that there are areas where abusing of animals is part of everyday life. People who live in those areas are mostly people who live on the edge of society or they belong to so-called problematic populations who do not have any support from authorities but authorities do not control them either.

Animals in Medjimurje (Croatia) are paying appalling price for the lack of involvement of authorities in solving the problems of the Roma population. Roma children (all younger than 14) have been torturing stray cats and animals in the most horrific ways for months. Media decided to become involved in the case a few days ago and their discoveries have been horrific. Children have been raping, clubbing, slaughtering and throwing animals on railway to be ripped apart by trains.

Also, dogs are being used as bite provocation for other dogs. Authorities now involved and everyone is hoping the problem of young psychopaths will be solved soon and that perpetrators will be punished.

I am dealing with a similar case in Breza. I found Sarpi in one very problematic area in Breza few months ago. He was badly beaten and injured. He died of injuries a few days after I had found him.

Garo was found by me in the same area few days ago. He has injuries on his hind legs and a wound that has been caused by an air gun. All these cases have been reported to the police, but the problem is that in the area where they have been found live many drug addicts, other very problematic populations as well as forgotten Roma population, and there is no video surveillance. Everyone claims he/she knows nothing. (Garo and Sarpi are pictured in this blog. If you wish to help with the vet care of Garo, you can donate via the details below, be sure to mark for ‘Garo’.)

Unfortunately, there is no appropriate response from authorities to violence in these areas.

There are also cases of severe animal abuse in developed countries. However, any such case is well covered by the media and the general public is involved in finding perpetrators. Names of animal abusers and murderers are publicly disclosed. Also, the punishments for offenders are rigorous and exercise a preventive and repressive function. Most importantly, the authorities are consistent in catching and prosecuting perpetrators. Western society understands that animal abuse is a serious anomaly in the behaviour and psyche of man, and therefore a great deal of effort is made in the prevention and punishing of animal abusers and killers.

In the former Yugoslavia, there is a problem in the minds of people, and not in lack of funding. In this region, the society is completely incapable of understanding animal abuse and why it is wrong. The society does not understand those who are unable to fight for themselves and their rights, as well as having a complete lack of empathy for those who suffer. Also it implicates that society in having a pathological feature. What the individuals and society in this area do not want to understand is that animal abusers are people with pathological personality traits, who tend to become abusers and killers of people (if not already).

Prosecution and punishing of animal abusers should be the basic function of protecting animals. Special prevention sends a message to abusers that if they re-offend their offence against animals, they are to be arrested and punished. The general prevention message is thus sent to the society: the state and the judiciary do not tolerate animal abuse, and the problem is recognized as a deep social anomaly and that each abuser is to be punished.

In the countries of former Yugoslavia torture and killing animals is a criminal offense. However, the arrest and prosecution of the perpetrators of the crime very rarely occur. It is evident that police officers, as well as prosecutors and judges, are not properly trained and educated. When it comes to the response of police officers, they tend to consider abuse against animals unimportant offences; police officers and inspectors in this area of crime are not familiar with all the consequences and symptoms that animal abuse points to. The problem of judicial institutions is similar; it is generally the view that cases of animal abuse are irrelevant to judicial institutions.

Apprehension and prosecution of offenders is the job of the police and judicial authorities, and funds for financing all types of institutional protection of animals can be provided by implementation of our Act on Animal Protection and Welfare, the introduction of compulsory microchipping and register of pets, and then punishing with fines those who abandon or abuse animals, as well as using funds from foreign organizations towards these procedures.

This approach to problem solving is necessary due to the general lack of awareness that exists in this area. The public itself creates a distorted picture when it comes to animals. Animals are not objects, but living beings with intelligence and awareness of the outside world, but this is not the general view of the populace of this area.

These are the main reasons animal abuse is so present in the countries of ex-Yugoslavia, especially in the areas where authorities actually do not their job at all. Police forces and social services avoid being involved or implementing laws in those areas because dealing with problematic populations is not a priority at all. This causes many issues including cases of horrific animal abuse. Intervening in these areas is absolutely necessary and only when animal rights activists expose the real picture of animal abuse and forgotten areas, some things start changing as is the case in Croatia.

Unfortunately, the situation in Bosnia is even worse because of a much higher rate of corruption, poverty and social cases than Croatia. Law enforcement and social services do not deal with this problem at all. If there are so many cases of animal abuse and killing of animals in well-known areas and big cities, we can only imagine what horrors happen in villages, areas and towns where there are no animal rights activist and persons who can discover and report those crimes.