A new brutal murder of stray dogs has happened in Sarajevo and once again all the people who love and fight for rights of animals are facing an extremely worrying case. An American citizen, who helps dogs in shelter Gladno Polje, as well as stray dogs around the shelter, this week found the corpses of two stray dogs near the shelter. She had been looking for missing dogs for a few days, before she found the bodies of dead dogs. Those dogs had lived outside the shelter before they were killed. One of the dogs was a female dog, thrown into water.

The second dog was also a stray dog which had its hind paws tied up and its body ripped apart. It was obvious that the dogs had been killed in a brutal way and that someone had intentionally left their corpses in the area near the shelter. Since they were disfigured, it was impossible to conclude exactly how the dogs had been killed. The number of cases of torturing of animals has been increasing in Sarajevo, and as well as all other cases, this crime is going to be reported to Prosecutor’s office. It is more than obvious that Sarajevo is a city that is full of psychopaths and this brutal crime proves this once more.

Rescuers are very concerned because those dogs have been killed in an area with a large populations of stray dogs. Gladno Polje is a public “shelter” near Sarajevo. More than 100 dogs live in this shelter in very bad conditions. The area of the shelter is open and anyone can enter there without being checked.  The strays that live outside and in the area of the shelter are exposed to this unknown offender who has proven that he is a brutal person. The method of committing this crime was particularly distressing as it was obvious one of dogs had been tied up. Dozens of helpless dogs are exposed to this psychopath who intentionally knows what he does and who is fully aware of actions and the consequences. The most important thing for this type of person is to be satisfied by expressing power and control over a helpless creature and thus temporarily alleviate his frustrations and / or complexes… until the next time…

Here is the transcript of the American citizen who found the dogs:

“Four puppies were dumped by the overpass at Gladno Polje shelter about a month ago. We had been feeding them and a chain link fence had kept them safe from the bigger dogs. Then last week, one of the puppies was missing, which was strange because they were always together. This past Monday evening I was relieved to see there were still there. But when I arrived on Tuesday afternoon, there were only two puppies. I walked all around the shelter, up the hill under the overpass, slogged through the creek and the mud–no puppy. What I found instead was what at first appeared to be a large mossy rock in the water. Then I realized it had fur. I dragged it out and saw that it was a female dog who was either pregnant or nursing. She had what looked like a gunshot wound on her side. I realized how urgent it was to find the puppy so I left her and kept looking. And that is when I found another dog lying dead in the bushes. His back legs had been tied together and he had huge wounds all over as though he had been literally torn apart. I’ve seen dead dogs that have been eaten by birds and this was not that. Some sick individual obviously thought it would be entertaining to incapacitate this poor creature and let another animal torture it to death. I wish I could say that I buried them, but the truth is I was so sickened that I left them there. I searched frantically for the puppy for another hour but he and the other missing puppy have vanished. I just hope to God that they manage to stay safe.”

If you wish to assist the rescuers in their efforts to save the dogs you can donate via the YouCaring: FEED STARVING DOGS OF GLADNO POLJE THIS WINTER SEASON 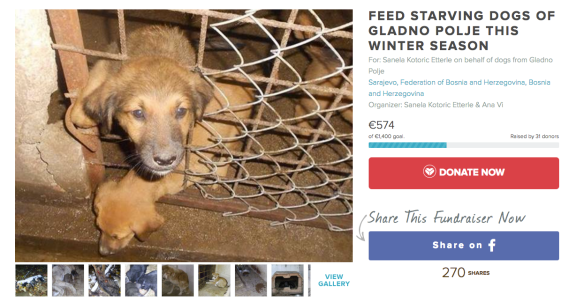 Shelters in Bosnia Herzegovina
What to do about Gladno Polje Shelter in Sarajevo?
Uncertain future for Dogs at Gladno Polje Shelter in Sarajevo
Saving the Dogs of Gladno Polje, Bosnia
Veterinary Office of Bosnia: is it possible to solve the problem of stray dogs?
Another Horror Shelter in Bosnia
THE HORROR SHELTERS OF BOSNIA – SOMETHING MUST BE DONE!
Saving Lucia and the dogs of Foča and Gorazde
Dog Shelters in Bosnia: A Complex Situation
Horror Camps for Animals in Bosnia
Concentration Camp for Man’s Best Friend
Concentration Camp for Man’s Best Friend PART TWO
Mass Graves Found Near Dog “Shelter”
Hresa Shelter:
Part One – Part Two – Part Three – Part Four – Part Five – Part Six – Part Seven

2 thoughts on “Dogs found slaughtered outside Shelter in Sarajevo”