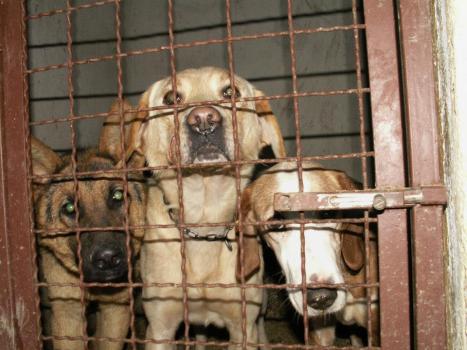 Here is the earlier story of Hreša:  Part One – Part Two – Part Three

WHAT YOU DON’T KNOW IS THAT AN ADDITIONAL TEN DOGS AND FOUR PUPPIES WERE ALSO RESCUED FROM HRESA ON THE LAST VISIT MADE THERE BY JELENA AND THE OTHERS.

Unfortunately 3 of the adult dogs and one of the puppies died shortly after rescue.

We could not make this news public until now as the threats made by the manager of Hreša shelter indicated he would take violent action against  Jelena Paunović and the other animal welfare activists who went into Hreša. It is still dangerous, but we feel that there has been enough publicity about this case to protect the activists.

The 3 adult dogs and puppy probably died of the same illness that took the first set of rescued puppies, and infected Jenny, who was in the same pension as they were. Jenny is doing better, she’s in King Pension, has gained 3 Kg. 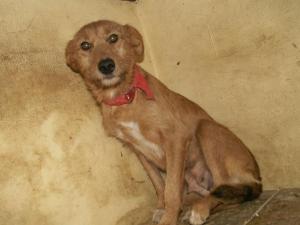 However, they need to be found homes as quickly as possible. Jelena has many other rescues in pension (nearly 20, costing at least 1,500 EUROS – $2000 USD per month in donations not including veterinary fees) who have not been adopted in spite of best efforts by everyone, so this is a very worrying proposition. 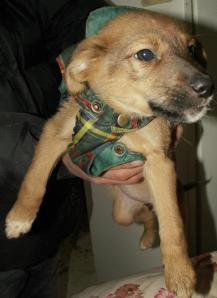 Or these rescues from Hreša can be moved into pension, but the fees for this would be huge: the pension that right now has availability for adult dogs costs 90 Euros a month (about 118 USD). King Pension is the only pension that takes puppies, and this costs 120 Euros  (about 158 USD) a month.

Other options are being looked into: perhaps Dogs Trust Bosnia and UK will help with funds, perhaps a shelter grant can be obtained from US or UK organisations for a new shelter that has proper facilities. But know that this  kind of thing not only takes time – months, maybe years, but is fraught with difficulties.

Susan Johnson of the US State department lived and worked in Bosnia as OHR Deputy High Representative and Supervisor of Brcko District, a special unit of multiethnic local self government under international supervised administration. She had the authority to stop the illegal shooting and poisoning of street dogs for bounty payments and she did all she could to implement an effective and humane animal control program. And she supported one NGO to set up a model dog shelter with extraordinary conditions for the dogs, a kind of heaven really.

In all of these efforts, in spite of her position, access to funds and so on, she did not succeed. During the 6 years plus this shelter was in operation it was subjected to sabotage, threats, abuse, theft and illegitimate lawsuits seeking to hold the operators financially liable for any and all dog bites in Brcko District. She had to close the shelter and re-locate the dogs to Serbia and then to the US, requiring an enormous amount of effort and funding. As she told me: “No local government, including the Sarajevo municipla authorities, understood or cared about managing this issue in conformity with EU standards, despite a law that was eventually passed incorporating EU standards.”

If you want to sponsor a dog or a puppy rescued from the Horror Shelter in Hreša to be moved to pension, or if you want to contribute towards blankets, warm jackets (40 euros each) and food, you can use the Hreša ChipIn

Go to your PayPal account (or set one up, it’s very easy) and send the money to: donations@awabosnia.org as a ‘gift’. Click on the image below to be taken to PayPal’s home page.

If you are interested in adopting a dog or puppy, please contact us. See the slide show below for all photographs, and all photographs above are of these ‘secretly’ rescued dogs from Hreša.

Perhaps you live in a situation where you can’t have a dog… perhaps consider ‘virtually’ adopting one: paying for the dogs food and board. You will be sent photographs and videos of the dog every month and you can choose a name for it – contact us if you are interested. 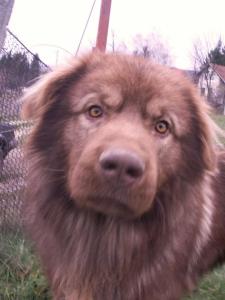 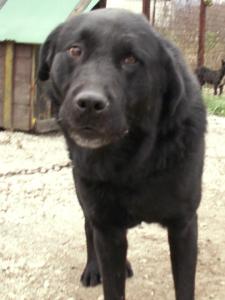 Jonny and Ricky, two of the saved adults

Of the first rescues who still survive, Grace is still in pension, doing better physically but still emotionally very damaged.

But the good news is that Clooney the lovely labrador has been adopted in Sarajevo!

UPDATE: December 9 BAD NEWS. Clooney’s owner had to return him as the landlord wouldn’t let dogs in the apartment. I’m devastated for the poor dog.