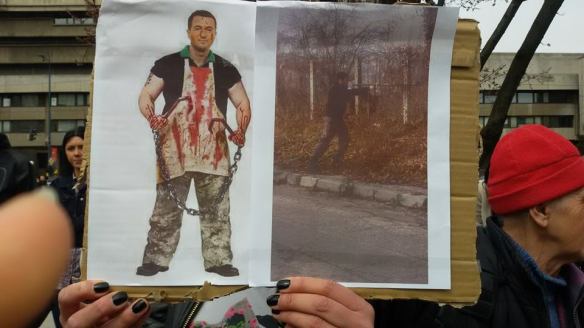 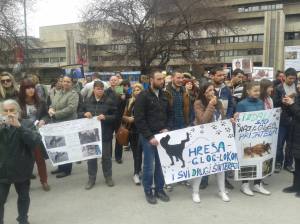 The aim of the demonstration was to express displeasure at the illegal and criminal activities of dog catchers who have been killing stray dogs and stealing money from the budget in Canton Sarajevo for two years. 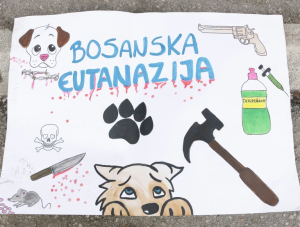 A notorious and illegal group of dog catchers was established in the municipality of Novi Grad Sarajevo on 30th May of 2013. This so-called “Hygienic service” was not established and registered in accordance with the article 29 of Animal Protection and Welfare Act as well as Ordinance on establishing and conditions that hygienic services must fulfil. Since then, thousands of stray dogs have been killed in Sarajevo. The worst thing is that they have the support of the Inspectorate of Veterinary Inspection of Canton Sarajevo and the Administration of Police of Canton Sarajevo. The paradox is that the veterinary inspection and the police, who are obliged to stop and punish illegal dog catchers, support them and protect their illegal activities. Stray dogs, which are caught by dog catchers, are placed in former military building “Safet Zajko” in Sarajevo. Mustafa Mrkulic, a veterinarian, dispatches the dogs in the veterinary station that is established and owned by the municipality of Novi Grad Sarajevo.

This illegal hygienic service invoices food, medications, veterinary services, placement, fuel, catching for dead dogs. Evidence for this was presented to Bosnian police officers and prosecutors. The Prosecutor’s office of Canton Sarajevo has started investigating allegations and evidences that Dalida Kozlic had presented in many criminal reports against illegal dog catchers. It is one of the worst violations of the Criminal Code in Bosnian history.

During the demonstrations citizens have demanded that authorities implement the Act on Protection and Welfare of Animals of Bosnia and Herzegovina, which would lead to solving of the problem of stray animals in a humane and legal way.

The Bosnian Act on Protection and Welfare of Animals is one of the best in Europe but no one is interested in implementing it. Corrupt authorities are often involved in illegal killing of stray and wild animals in their money laundering activities. Stray animals are victims of notorious torture. Politically eligible persons construct so-called shelters for stray animals, which are essentially concentration camps, and they invoice false spay/neuter programs, for food that is never be given to animals, for veterinary examinations and treatment, and at the 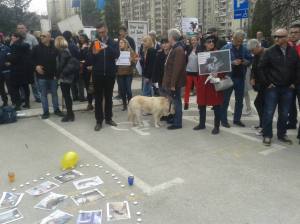 end for the means for euthanasia. In reality, the stray animals are tortured, and killed in worst possible ways, by methods which the medieval Inquisition would be envious. It is illegal and represents a series of violations of Criminal law as well as Animal Protection and Welfare Act of Bosnia and Herzegovina.

Also the demonstrations were symbolic because the 4th April is the International day of stray animals. Many citizens brought pictures and candles for all stray dogs that have been killed by illegal dog catchers.

See also: Sarajevo: Dogs Have the Right to Live on Journalists for Animals

Former Military Base in Sarajevo involved in dog killing?
“DOG-CATCHERS” OF SARAJEVO CAUGHT IN ACTION!
AUTHORISED SLAUGHTER OF DOGS IN SARAJEVO
2014: What is happening to the strays of Bosnia Herzegovina?
Animal Advocates Assaulted in Sarajevo
Bosnia: Let’s Respect Animals and their Right to Life
Veterinary Office of Bosnia: is it possible to solve the problem of stray dogs?
The “Aggressive” Dogs of Sarajevo
The Campaign Begins With a Slaughter: You will kill the dogs, but what will you do with the beasts?
Stray Dogs of Sarajevo to be Killed in Election Ploy
Stop the Killing of Strays in Sarajevo
Bosnia: Sarajevo set to become the next Bucharest
BOSNIA: kill and slaughter until the dog is no more…
Bosnia Killing Dogs – No Different to Romania!
ANTI KILL-LAW FIGHT – NOW WHAT?

Donations are managed by AWABosnia, an independent group of animal advocates. On their website, Animal Welfare Advocates for Bosnia, you can set up a monthly donation via PayPal, or if you want to make a one-off donation, please go to your PayPal account (or set one up, it’s very easy) and send the money to: donations@awabosnia.org. Click on the image below to be taken to PayPal’s home page.