The critical situation in Sarajevo is getting worse and worse. One of the citizens of the city has managed to video the dog catchers of P.E. “Lokum” of Novi Grad, Sarajevo, while they were catching a stray dog in Dobrinja (Sarajevo) yesterday. This is new evidence that the notorious group of Lokom dog catchers has started working again. Unfortunately we cannot show the video, as we need to protect the person who made it.

Mustafa Mrkulic, the infamous veterinarian who worked as a director for the P. E. Veterinary station Reljevo, owned by P. E. „Lokom“ ltd., was fired but things have not changed. After 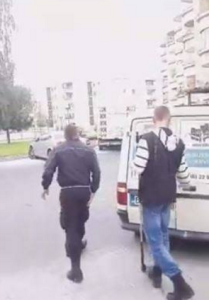 Activities of Lokom dog catchers have also been noticed in the municipality of Novi Grad. The dog catchers of P. E. Lokom catch dogs in other municipalities of City of Sarajevo every day.

Dogs that are caught by Lokom dog catchers are taken to a veterinary station in Reljevo to be ‘euthanised’ – it’s a place where it is very difficult to save dogs.

Dogs that are caught by dog catchers of P. E. “Rad” Ltd. Sarajevo, the hygienic service for catching stray dogs, are taken to the Cantonal veterinary station where so far many dogs have been saved by rescuers, but a lot of dogs have been taken to illegal shelters or they have vanished.

Please read related articles/blogs on this site for more information:
Disturbing Irregularities found in Dog Catching Service of Sarajevo
The Dog Catchers of Sarajevo are Back
Pope’s Visit to Sarajevo Means Death for Dogs
Sarajevo Demonstrations Against Illegal Dog Catchers
Former Military Base in Sarajevo involved in dog killing?
“DOG-CATCHERS” OF SARAJEVO CAUGHT IN ACTION!
AUTHORISED SLAUGHTER OF DOGS IN SARAJEVO
2014: What is happening to the strays of Bosnia Herzegovina?
Animal Advocates Assaulted in Sarajevo
Bosnia: Let’s Respect Animals and their Right to Life
Veterinary Office of Bosnia: is it possible to solve the problem of stray dogs?
The “Aggressive” Dogs of Sarajevo
The Campaign Begins With a Slaughter: You will kill the dogs, but what will you do with the beasts?
Stray Dogs of Sarajevo to be Killed in Election Ploy
Stop the Killing of Strays in Sarajevo
Bosnia: Sarajevo set to become the next Bucharest
BOSNIA: kill and slaughter until the dog is no more…
Bosnia Killing Dogs – No Different to Romania!
ANTI KILL-LAW FIGHT – NOW WHAT?