Occupy For Animals
http://occupyforanimals.wix.com/straysofeurope
Non-governmental,  non-political,  non-religious and non-profit organization at the service of the animals,  registered in Luxembourg. Although an estimated 100 million free roaming dogs (owned dogs and stray dogs) live in Europe, there are no governmental sterilization programs in none of the most affected countries, which would improve the situation greatly. This results in a constant flow of kittens and puppies to replace the dying adult population, and so the sad cycle starts again, year in, year out.

Most of the signatories of the ‘European Conventions for the Protection of Pet Animals’ have considerable and growing stray animal populations. These countries are: Azerbaijan, Bulgaria, Cyprus, Czech Republic, Greece, Italy, Latvia, Lithuania, Portugal, Romania, Serbia, Turkey, Ukraine (signed the European Convention for the protection of Pet Animals, but did not ratify it). More information
Occupy for Animals – Petitions to the European Union

Making the Link – A study to identify psychological effects of children regularly exposed to uncontrolled community animal abuse and evaluation of efficacy of interventions. 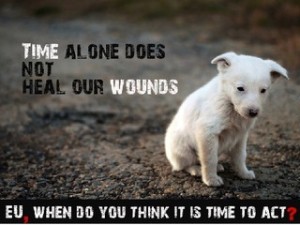 “Recognizing that man has a moral obligation to respect all living creatures and bearing in mind that pet animals have a special relationship with man” – European Convention for the Protection of Pet Animals, Strasbourg, 13.11.1987

Paws for the News – a voice for all animals

Serbian Animals Voice (SAV) Serbian Animals Voice (SAV) alliance is a completely volunteer run organisation which primarily campaigns for the better treatment of all animals within the Balkans states; especially on behalf of stray / roaming street animals.  Over the past few years we have expanded our campaign work to cover worldwide animal welfare issues.  SAV is a completely non-violent organisation which undertakes all of its campaigning through information networking and the written word.

Cat Shelter Felix A homeless cats shelter in the Vojvodina region of Serbia
This shelter needs support to create proper shelter facilities for the homeless and abused cats of this region. There are more than 100 cats in Cat Shelter Felix currently and it costs at least 30$ per month to provide nutritious food and quality veterinary care to each of them. You can sponsor a cat of your choice for 30$ per month and you’ll receive photos of “your” kitty, as well as regular updates. Can you resist their cute little faces?

CHAIN PRAYER FOR THE WELL-BEING OF THE ANIMALS
A day of prayer on the 4th of each month for ending all cruelty and animal abuse
(Note: regardless of your belief system the power of prayer might well help.  According to American Psychological Association Division 12 criteria, intercessory prayer is classified as an experimental intervention that, overall, shows a small, but significant, positive effect).

TONGLEN -The tonglen practice is a method for connecting with suffering —ours and that which is all around us— everywhere we go. It is a method for overcoming fear of suffering and for dissolving the tightness of our heart. Primarily it is a method for awakening the compassion that is inherent in all of us, no matter how cruel or cold we might seem
to be.

Other sites with information:

Information and Resources on Alternatives to Animal Testing
“There are a variety of alternatives to animal testing, each of which helps save animal lives. In addition to preserving animal lives, the available alternatives to animal testing are reliable and efficient, unlike what many may believe. Additionally, by participating in methods that do not involve animals, the tests that are completed can take less time and cost less as well. Some of the other methods that can be used in place of animal testing include studies completed and tested on volunteers. Some of the more sophisticated techniques that are used include computer modeling, genomic and in vitro.”

Animals Lebanon
Animals Lebanon works to protect animals through legislation, education, campaigns and rescue. Animals Lebanon believes that our treatment of animals is a reflection of how we treat ourselves and each other.  We believe that the welfare of all animals matters, and are committed to bringing about a time when these beliefs are embraced by society and Lebanon is recognized as a leader in animal welfare.

Save Our Street Dogs  – for Singapore street dogs
“While there has been a recent glimpse of progress in animal welfare in Singapore, at the same time the dire culling crisis of our stray dogs have escalated significantly. The bloodied robbery of their innocent lives to be mass culled for a reason no more than being a homeless dog has become standard procedure for urbanization.

An unknown group of volunteering stray lovers; feeders and rescuers from various walks of life have come together in a hope to pursue change for these innocent animals. We have named our group simply: Save Our Street Dogs (SOSD).

Save Our Street Dogs (SOSD) is banded together by the common passion and conviction to be part of a unified voice, purposed to make a difference and effect change to the welfare of our street dogs—our homeless strays.
Our group objectives are simple. They focus on advocating for the strays, and assisting in managing the integration and acceptance of mongrels (cross-breed) in a compassionate and humane society. Our mission is to save our street dogs and give them a chance in life, to the best of our capacity and limitations. Until each dog has a refuge of safety; a home to call its own.”
Ol Boy – Fulfillment of a Dying Wish